They’re off!!! Merrick and Scott are boarding a plane as I type to Washington to pick up our friends new truck and our new shaved ice trailer! 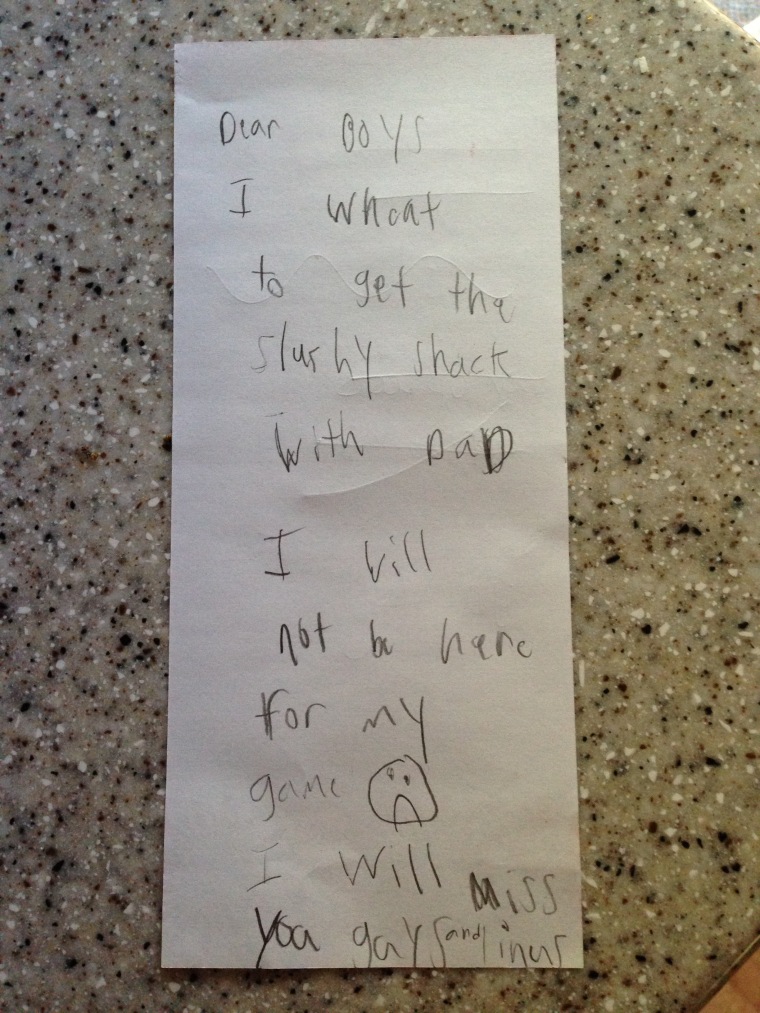 A few months ago Scott had the idea of running a shaved ice trailer in Valdez. He did research on the business and cost analysis then presented the idea to me. We found a few nice trailers but one in particular stood out, Captain Snowbeards!! It’s was a great price and the trailer is so cool! Scott called the owner and it turns out him and his wife are from NORTH POLE!! Crazy!

The theme is perfect for Valdez! The owners agreed to meet Scott in Oregon so he didn’t have to drive all the way to Las Vegas. WIN!

We spent some time trying to find someone to drive with Scott. It was planned to be a turn and burn type trip and if there were two drivers it would be faster. We didn’t have any luck finding a driving partner so the plan was for Scott to take Linus. Then out of the blue a friend bought a new truck in Washington and was going to fly down with Scott and pick up the new truck and trailer then drive back! Awesome deal but our friend didn’t have a passport. Bummer! So then the idea morphed  into Scott flying down with Merrick, picking up the truck and trailer then driving back together. Of course no trip to Washington would be complete without a ball game of sorts so unbeknownst to Merr they are going to a Mariners game.

They’ll be gone for about 6 days in all. Keep them in your prayers for safe travels. I imagine this trip will have a few crazy stories since Merrick is involved. I’ll keep you posted!

Like most situations when shit hits the fan Scott was leaving that morning for Valdez.

I was awoken at 5:30 AM by the sound of a dog puking. I was concerned but not overly concerned. I assumed it was just a fluke, something he ate the day before wasn’t digesting. This dog eats all sorts of random items. We’ve found a small lego batman cape in his poop. It was a super turd!

I took him outside where Linus went to the bathroom and did his normal routine. I brought him back inside to eat his breakfast and watched as he drank a half bowl of water then proceeded to vomit nonstop until 7 AM. I no longer thought his puking was a fluke. He got to be so weak he would collapse while puking.

I called the vet to warn them I’d be there at 8am as soon as their doors opened. Scott, who was packing to head back to Valdez is now in charge of getting the kids ready for school and staying in town long enough to get the kids to school.

Linus was weak and you could see his discomfort in his sad eyes. We walked into, let me state the truth, I carried our 50 lb 4 month old puppy into the vet and placed him down on the ground. Not that he couldn’t walk but he’s my baby. As soon as I put him down he started acting like he was perfectly fine! Barking, jumping, acting playful. I looked at the vet and swore he had been puking all morning and was lethargic. I felt like I had Munchausen syndrome by proxy. She believed me. Her concern was a blockage and wanted to do an X-ray.

Scott dropped Kierran off to me at the vet office after dropping the other boys off at school and took off for Valdez.  I would typically insert lots of guilt here about how shit hits the fan when he’s not around to help but I’ll refrain since he didn’t have a choice. If you’re a military spouse or just a spouse in general you know what I’m talking about!

We left Linus at the vet and waited for a call. About an hour later we got a call and some X-rays. It was a blockage all right and an impressive one according to our vet.

Surgery was inevitable so the vet started taking bets on what exactly the object was. I said a nerf disk. No one got it correct. Hours later I got a call that he did great during surgery and is recovering nicely. I could pick him and our slightly contaminated flower magnet up around 5pm. He swallowed a magnet?!? She said they didn’t have to cut open his lower intestines because they were able to “milk” the magnet out his butt. Ewwwww! I’m not sure which grossed me out more; the use of the word milk or the fact she popped it out of his butt. Either way nothing is more gross then owning a $1030 magnet.

I grabbed the boys after school did our homework routine and drove to the vet to pick up Linus. He was so groggy he could barely wag his tail. My poor pup. He got some meds, the cone of shame and a list of instructions as a parting gift and I got the magnet in a baggie. He whimpered and whined as I got him into the car. The boys were so worried about him I had to keep shooing them off. I sat down and Merrick asks where the magnet was. I remove the baggie from my purse and handed it to him. Instantly he opens the bag and smells it. WTH!! “It smells like dog food!”

When we got home he was still loopy (Linus not Merrick like one would probably draw a conclusion after the magnet sniff) and sore. The boys tried to make him comfortable. 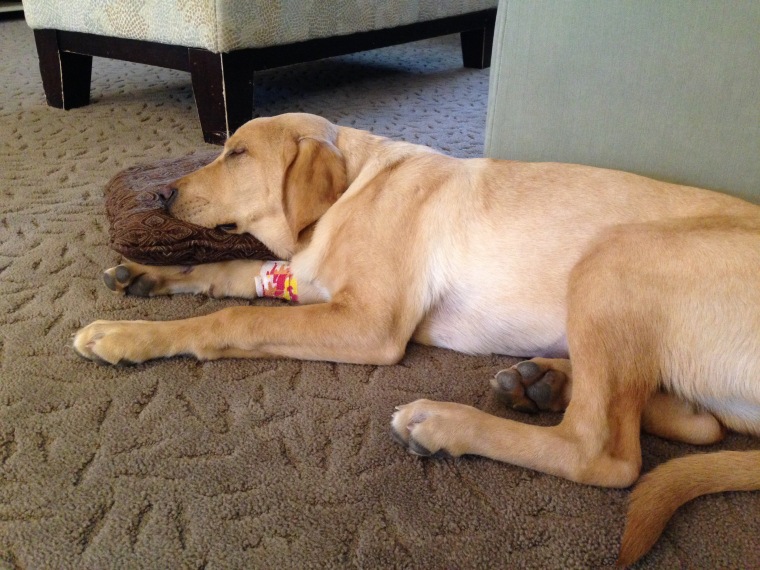 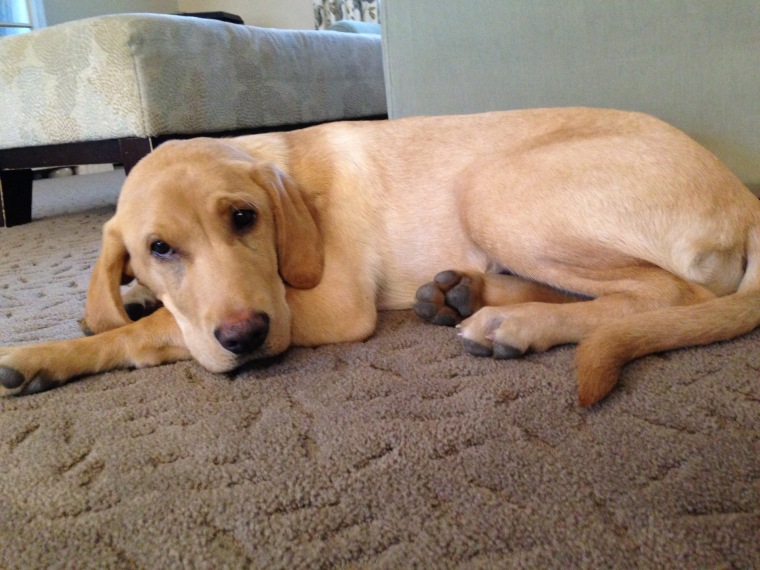 Merrick is trying to convince him to eat a little food so he can take his medicine.

I was up with him through the night but it wasn’t as bad as I expected it to be. Even with the cone of shame he developed an infection so we went back to the vet for some antibiotics.

I took him to work with me so I could keep an eye on him. After 24 hours in antibiotics he was back to his normal puppy self. You would never have thought he had surgery. He did better then I did after my C-section with Kierran.

The upside to all of this is that Linus just so happened to have double coverage! We purchased health insurance for him from one company and he got free 2 week coverage from AKC when we registered him. After all was said and done we broke even.

Now completely healed I’m sad to say he has not learned his lesson and I’m digging weird crap out of his mouth every day. I’m just grateful I’m not milking anything out of his butt!