I found some of my powder makeup in Kieran’s drawer today. I asked him what that was about and he said he needs it for his cheeks in the morning because the makeup comes off at night. He picked up the face powder, opened the container and began smearing it on his cheeks. It’s flesh color so you really can’t see it. Good grief. There’s worse things right?

Like the other day Kierran wasn’t feeling well. His stomach was sour. All he ate was an applesauce cup and drank two small glasses of water. The next morning he awoke and was starving. He ate pancakes and bacon and begged for a Gatorade. I was hesitant but he did only have two small glasses of water the previous day. He must be dehydrated from the day before so I let him have the small bottle of red Gatorade.

10 minutes later all of it came up on my couch and carpet. Red, chunky, projectile vomit. UGH! I moved him to the bathroom in front of the toilet and directed him to stay. Right then a person renting our chicken plucker pulled into the driveway. I think I failed to mention Scott wasn’t home AGAIN! I handled the plucker business and came back inside to find the dog eating the puke. WHAT THE HECK! (I really didn’t think the word heck) I peeled Linus away, trapped him upstairs and ran to the bathroom to find Kierran in the same spot which surprised me. He REALLY must not be feeling well because that has to be the longest he’s ever followed directions. In the tub he goes. Cleaning here I come.

After everything and everyone was cleaned up I started packing up the living room. Kierran lay in a box near me looking pathetic.

Cute but pathetic. He started dozing in and out of sleep. Poor boy. I thought he would have woken with a start when his brothers yelled from up stairs. “MOM!!! MOM!!! ALASKA STATE TROOPERS IS ON NETFLIX!” But Kierran lay there, in the box motionless. The boys LOVE Alaska State Troopers. That will keep them happy and out of my hair for a few days. Thank you Netflix. Moments later they yell from upstairs again, ” MOM! MOM! We saw Mr. Piscoya!!!” He’s a friend of ours and a Lt. at the AST. Kierran remains motionless but manages to mutter in the most self pity filled, on the verge of tears voice, “Their dreams are coming true…but mine aren’t…because I’m sick.”

I burst out laughing. Kierran did not find it comical. I couldn’t text Scott the story fast enough. Who needs girls when you have this drama coming from boys! 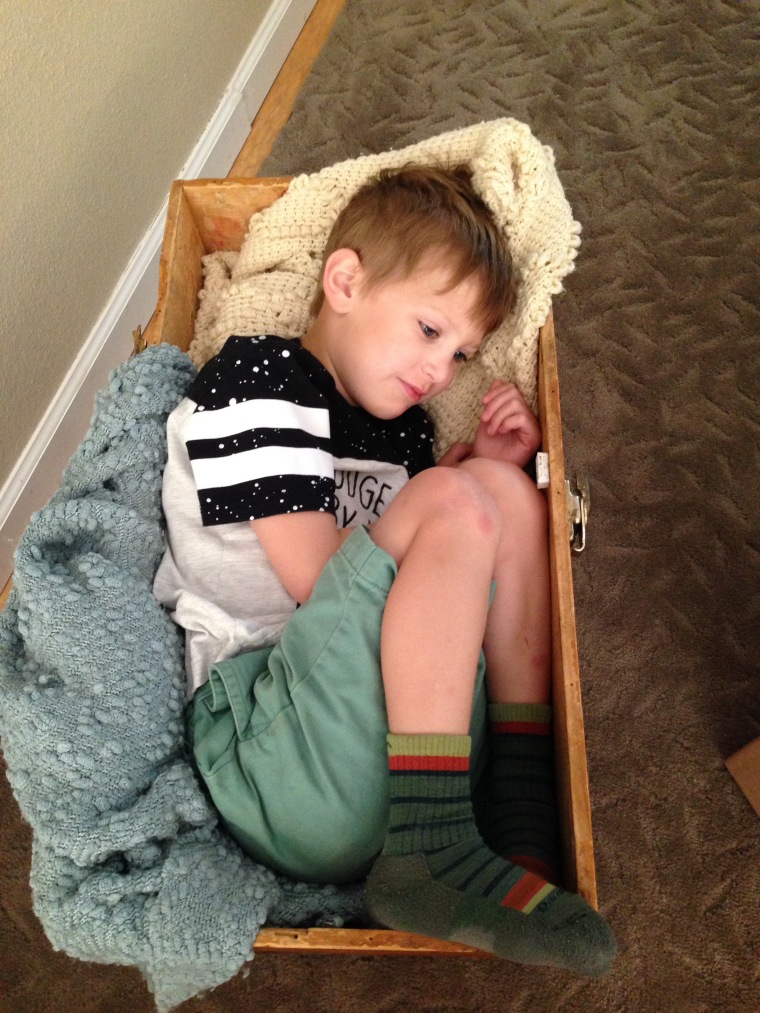