First leg is a 5 hour drive to Anchorage. This is after a week of laundry, working on three weeks of lesson plans, cleaning and planning house sitters and dog watchers. Holy smokes I’m exhausted just recalling all that work.

We have a 3.5 hour flight from Anchorage to Seattle and a two hour layover which is the perfect amount of time to get off the plane and change terminals before the 2.5 hour flight to LA. Once in LA we have an 8 hour layover. I’d complain, but we got a hotel room so we can go lay down, shower and watch TV or read in prep for the 13 hour flight in economy class. I’ve never flown overseas before and obviously the kids haven’t either. We aren’t sure what to expect. 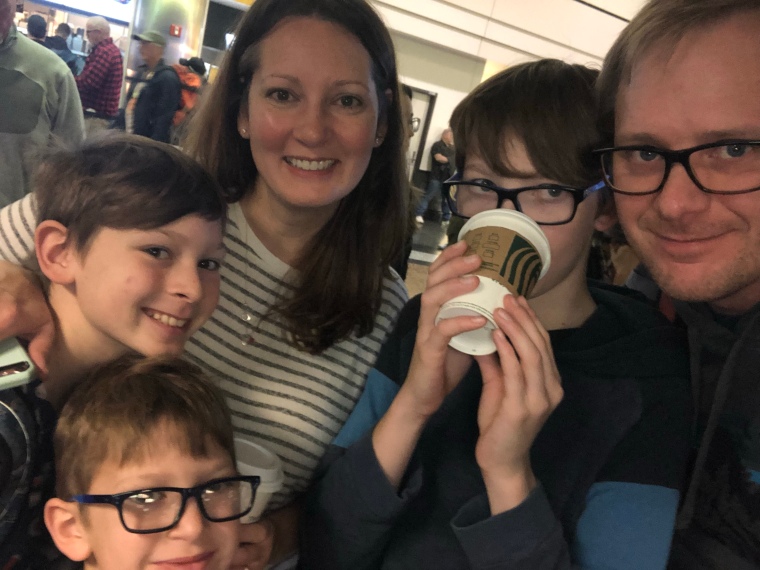 As we wait to board our first flight Merrick made a friend with a man we met in security. Born on a farm he grew up flying his dads crop plane. His experience with plane maintenance, military missions, passenger planes and French interrogations…its was pretty amazing. We even heard he was a bit of a partier, but found himself a good Christian girl to settle down with. This is when he told the boys to never do drugs and don’t smoke. The man had a lot of knowledge to share with Merrick and Merrick ate it up.

On the flight from Seattle to LA Scott got our seats in premium while the three boys sat behind us in the regular seats. We haven’t taken off yet, but I can already tell we aren’t far enough away to make the free beer worthwhile. I hope they all fall asleep.

They did not fall asleep and I’m glad this was the only flight where Scott tried to get us “away” from the boys. I kept getting poked between the seats to help or console or ask a question…ugh. I did spy this from my seat

I should have monitored the clothing they picked out for the plane ride a little closer.

They held it together on the plane and in the airport, but they lost their shit in the hotel room. I closed my eyes and let it happen. Jumping around, wrestling with each other, hitting, teasing and all that boy stuff. Maybe if they get it all out now they’ll be ok for the flight to OZ. That’s what I’m telling myself.

While we waited for our plane, Rebel Wilson (an actress) was paged by Quantis Airline for her flight to OZ. WHATTTTTT! Too bad we were on a different airline. I could have gotten in a good stare as we walked past her premium business seat.

Despite it being 11 PM when we finally took off the airline promptly served us dinner. As soon as dinner service was done I said lights out to the boys. I think everyone slept well. Scott said Virgin Australian’s economy class was the best he’s been in. Looks like we won’t be upgrading on the way home.

In the line going through customs an old crotchety lady cut in between Scott and me. Scott has K and M and I had Barrett. She just zipped past me and stopped. Mind you we were all in line. We were all talking amongst each other so it had to have been obvious we were all together. We turned one corner and there was a big gap so B and I squeezed back up with the others. We cruised through customs and I whispered to Scott that I hoped that lady got flagged for a search and she did!! Ha! Doesn’t pay to be rude. Scott said it’s a common tactic to mix in with other groups of people to slip through customs so the agents are very observant with that kind of activity.

We made it!!!! Before leave the parking lot of the car rental before Scott turned into on coming traffic. He’s catching on quickly.