I rearranged the condo we are renting On day 2. The original set up was awful. When we walked into the front door we walked straight into the dining room table. If we tried to sit and eat, one person would be left out because the table was pushed against the wall leaving 4 seats open. The couches were arranged so we couldn’t see the TV and all the walkways were blocked with random side tables and chairs. I had enough. Scott was out BBQ’ing (the BBQ’s at this resort is like cooking on a stove top not a grill) and I pushed furniture around until it made sense. I created an entry and a living area/dining where everyone can sit and see the TV if need be.

Where you see the small, white hall table…that’s where the dining table was. That’s Merrick being a turd because we are doing math homework. Now, my dream is the owner will love the new arrangement. Odds are, she won’t and I should probably move it back before we leave. Hmmm, am I feeling lucky?

Today we didn’t have plans so we decided to do surf lessons. Mr. Snowboarder, Merrick, said no lessons for him. Weird. Barrett and Scott will have lessons on Tuesday but Kierran scored lessons today! We got ready and took off for Currumbin Beach.

It was a hot and sunny day today. It reached 85 degrees! The water was freezing however. The beach where the lessons were was not swim friendly. The undertow was really bad. While Kierran surfed, Merr and Barre played in the water and sunbathed.

Kierran was doing so well! He got up on his board in the waves and road them in. We were so impressed. Scott got some good pictures on the nice camera that I’ll share later.

After an hour I saw my littlest man staggering toward me with his lip quivering. He’d had enough and was taking a break. The waves were over powering him and he was tired. Poor pup. He snuggled on a towel and warmed up while I read my book. Scott played with the older two in the surf.

I’m not one to whine in the heat, but I had enough today. After we returned Kierran’s board and rashie (rash guard) we packed up and left for home. We ate lunch, played in the pool, showered and went to the mall. Barrett has been eyeing these wooden sunnies (sunglasses) since we got here and decided to make the purchase. The mall here is FAN-CEE! Stores that I can’t walk into for fear of being Pretty Woman’d. We stuck to what we knew and made a few purchases.

I am in absolute love with the way people dress here. Everything is so light and airy. The colors are muted or bright and cheery. Lots of linen and bare feet. Everything I want to buy I’d never be able to wear back home. BOOO

We returned home for a bit more homework and relaxation before dinner, an evening swim and bed. A very chill day.

The boys (not Barrett) woke up at 6:30. I told Kierran to please go lay back down and see if he could go back to sleep. Fifteen minutes later he crawled back into my bed and said he went back to sleep with his eyes open while coloring. Scott and I rolled our eyes. “Wow, that’s talented.” I said with undetectable sarcasm. He responded, “Yeah, I’m talented.”

We had pancakes for breakfast and Scott took off for some errands so I did homework with the boys. When Scott returned we went to Sushi Train for lunch. The boys have been begging to go there and I was also eager because I’ve never been to one before. 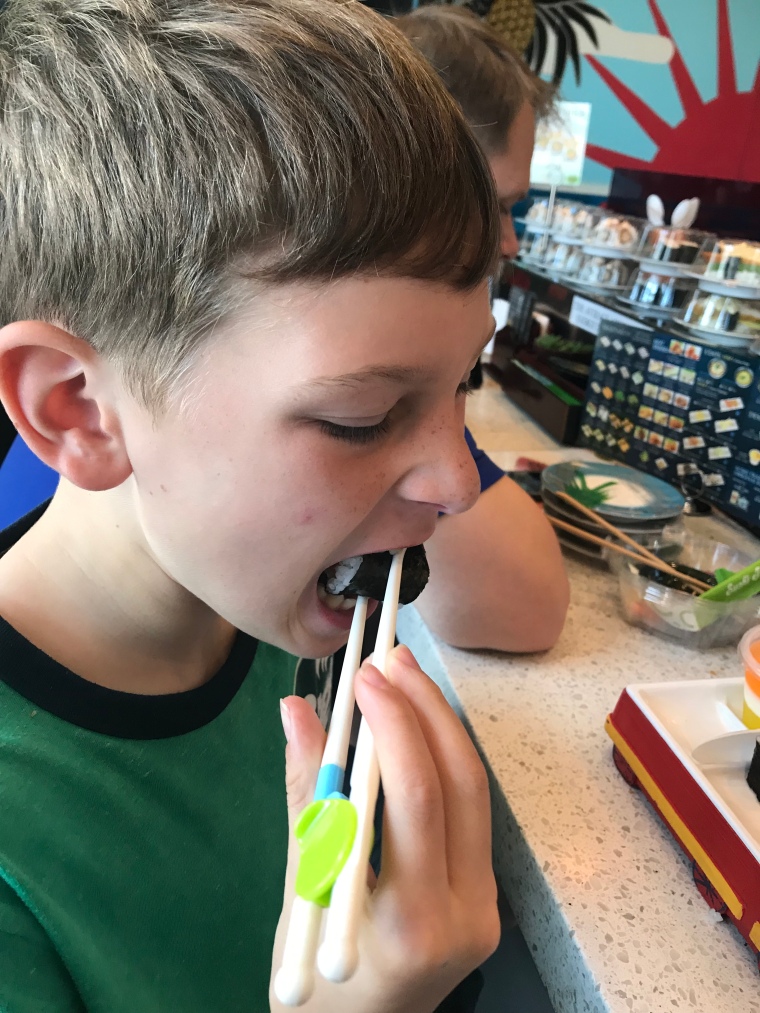 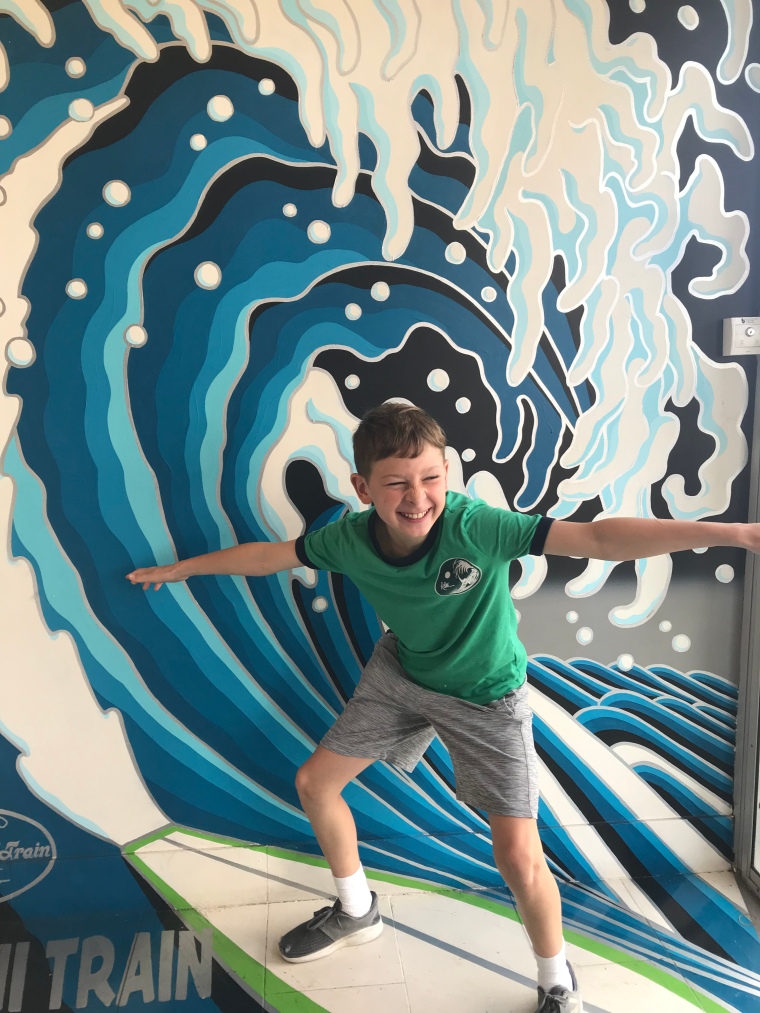 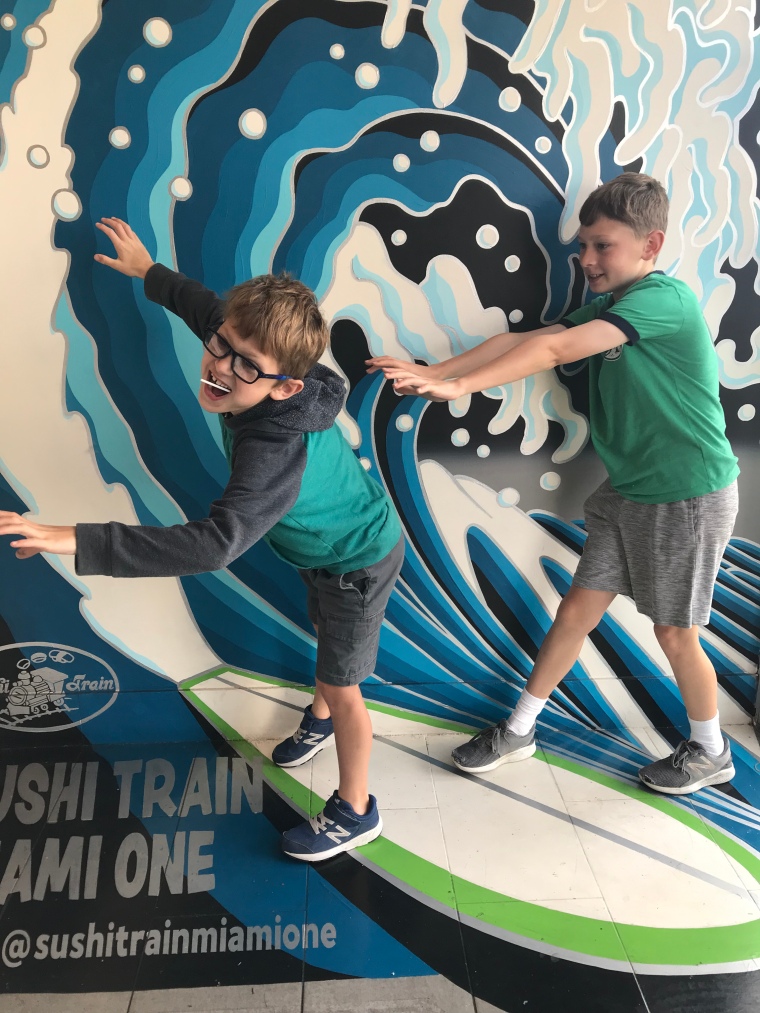 Everyone loved their meal and it was the cheapest outing yet! Win, win!

Next was the cultural center. We found lots of information about the Gold Coast and some locally made crafts. We bought a few souvenirs and headed to the outlet malls. The boys had some money burning holes in their pockets and Merrick didn’t have much luck at the fancy mall so we were hoping for better luck this time. 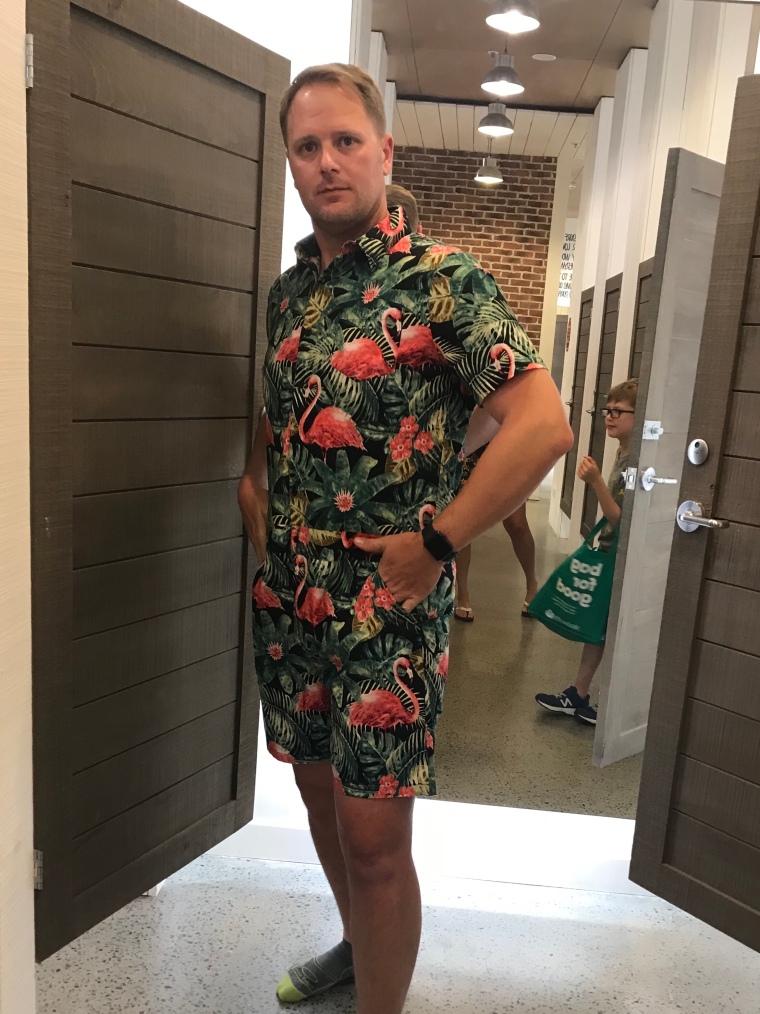 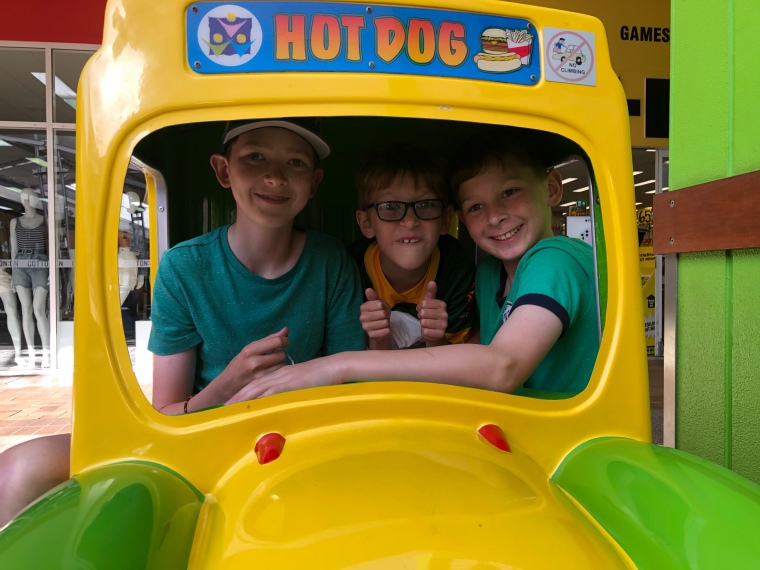 We came home with some more souvenirs, a rugby jersey and two didgeridoos. Good luck all around. Scott didn’t get the romper. Too bad huh!? I told him it didn’t look half bad.

We came home and made dinner. After dinner the boys wanted to go swimming, but the pool was full of unsupervised teens who were being too vulgar for me and my crew so we watched a few episodes of Bondi Beach, Friends and The Amazing Race Australia. Tomorrow is our last beach day so it should be a good one!