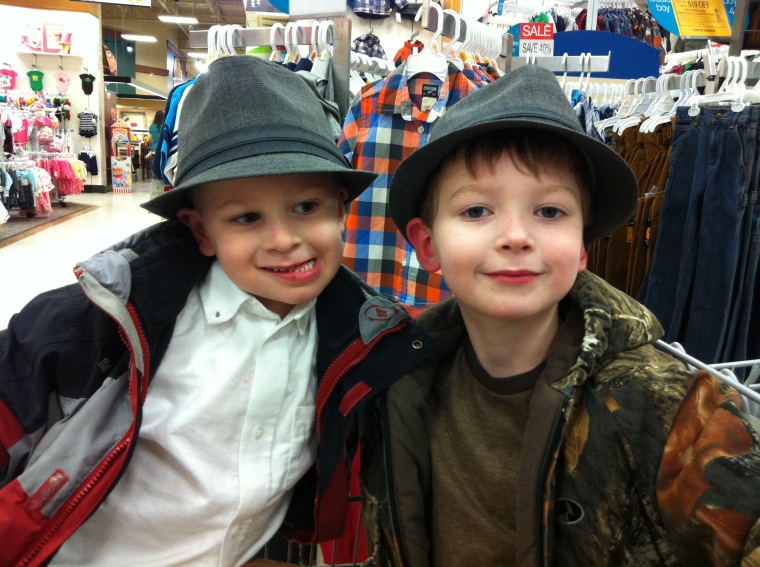 Scott has been gone for work conferences. I’m on week two. He returned home for two days and took off again this morning. This week I decided to help assist my efforts with weight watchers by NOT drinking beer or wine. I was going to give up coffee too but I figure I’ll wait until I run out of creamer.

Both boys came downstairs tonight. Merrick was hiding something behind his back and Barrett was telling him to show me something. Merrick refused but both were laughing so hard I can barely make heads or tails of what’s happening. When the laughter died out Barrett says “Just show her!”
“Look mom, we made juice.”
“How did you get juice? OH MY…..”
Lots of giggling
“It’s pee!! It’s pee!”
“YOU PEED IN A SIPPY CUP!? Throw it in the sink. NO, throw it in the trash! DON’T TURN IT UPSIDE DOWN IT’S DRIPPING!”
I caught my self about to laugh.

I CAUGHT. MYSELF. ABOUT. TO. LAUGH!

Motherhood does some crappy things to your sense of humor. I’ll try giving up alcohol next week. But there is none in the house and the idea of throwing the kids in the car and driving to the liquor store just seems wrong. Especially after the regular check out guy knew my kid by name a few years ago. Talk about shaming someone out of a casual, my kids drive me crazy drink!

Grocery shopping with kids rarely happens without an incident of some sorts. More often than not it’s because of my kids behavior but the other day, a normal shopping trip with just ONE kid rather then THREE still became troublesome because of a couple of loud mouth, opinionated old bags!

I can shop at Walmart with little issue. Maybe it’s because I’m a Walmart elite? That sounds snotty but really, most of my issues happen in Sams Club and Fred Meyers. Last week the older two were at school and Kierran and I were shopping alone. Easy! I sailed through Walmart and was ready to knock out Freds. I’m approaching the front entrance and there is a lady who stops and makes eye contact with me. I quickly look away because the history with most people of a certain ethnicity and appearance, hanging outside Freds is that they are looking for money. I look up again to see if she’s switched to another person but no such luck. Walking into the store I hear her say “You should put a hat on your baby.” HUH?

Even typing this post I exhale an enormous sigh and roll my eyes.

It’s 10 above (which is almost shorts weather here!) and I was walking from my warm car to the warm store and I was parked really close. Not across the street! Not to mention you can’t get a cold from the temperature. I smile and say “He’s tough.” A lady walked in behind me with a 2 year old also without a hat and the lady said the same thing to her. This lady, she was smart. She ignored her and continued walking into the store. I stopped and got a cart.

“You might think your son is tough but that cold weather can give him an ear infection and he’ll get a cold.”
“Ok, thanks. I’ll keep it in mind.” I really don’t want to start a conversation with her about his hat in the car and how he just takes it off so I was being as nice as I could and started to walk away when she says, “I should know, I have three sons and….” This is where I blacked out.

There is this part of me that really wants to speak my mind and it’s getting harder and harder as the years pass for me to bite my tongue. When I was young I held back from fear then it morphed into respect and tolerance. Now, I’m not sure whats happening but this day I was pushed to a new limit and I’m not sure how well I’ll handle the next time.

At some point I interrupted her and said “I really appreciate your opinion, thank you.” and walked away seething. In my head I’m yelling, “I have three kids too and none of them have ever had an ear infection so I’m guessing by your judgement and standards I’m a better mom then you!” I was able to brush it off by the time I was checking out until I got to Sams.

The trip though Sams was fine the problem occurred while I was checking out at the door. The old lady says “Where’s his hat?” I got a little snippy here. “He keeps pulling it off his head so I’ve given up putting it on him and its warm out.” She seemed a little startled probably from my tone and sailed right into a conversation about how she had a son who always took his shoes and socks off where ever they were. THEN WHY ARE YOU ACCOSTING ME IF YOU UNDERSTAND!

I don’t understand these people who are so quick to put their nose into a strangers business. It’s not like I was totting around an infant in -20 weather in swim shorts! I try to think they were only trying to be helpful but I dismiss it quickly because their opinions weren’t helpful. Unless a kid is in serious danger keep your mouth shut! It’s annoying. There was another time in Sams when Merrick was hanging upside down from the hand rail of the shopping cart. I had both boys with me and I was 9 months prego with K. I was looking for a spice and this lady walks up to me and says “Should your son be doing that?” I’m pretty certain my eyes turned red and horns sprouted. I was irritable, pregnant and shopping with two kids. BAD COMBO! “Probably not but is he hurting you? Then mind your business.” I know I came off like a bad mom but the truth is I’m not and if he fell and hurt himself I bet next time he wouldn’t do it.

I believe things happen to us for a reason and we need to learn from it. The lesson I take from these incidents is “Keep your parenting opinions to yourself unless you are asked and don’t be quick to pass judgment on others” I for one don’t want to be the subject of someones blog one day when I’m old, mouthy and opinionated so I’ll save that behavior for my husband and girlfriends. I do feel bad for the next person I encounter who feels free to correct my parenting. I’m not sure how I’ll respond.